This was the first major land battle of the armies in Virginia. On July 16, 1861, the untried Union army under Brig. Gen. Irvin McDowell marched from Washington against the Confederate army, which was drawn up behind Bull Run beyond Centreville. On the 21st, McDowell crossed at Sudley Ford and attacked the Confederate left flank on Matthews Hill. Fighting raged throughout the day as Confederate forces were driven back to Henry Hill. Late in the afternoon, Confederate reinforcements extended and broke the Union right flank. The Federal retreat rapidly deteriorated into a rout. Thomas J. Jackson earned the nom de guerre “Stonewall.” By July 22, the shattered Union army reached the safety of Washington. (source)

At the outbreak of the Civil War, the U.S. Army consisted of just 16,000 men — fewer than 200 companies, nearly all of which were stationed west of the Mississippi River. Although made up of trained career soldiers, a force of this size was insufficient for the scale of conflict the Civil War promised to be. Understanding this, upon the bombardment of Fort Sumter by Confederate forces, President Abraham Lincoln called for 75,000 volunteers to quell the insurrection.

Accommodating such a surge in the ranks would be additionally complicated by the fact that much of the officer corps were Southerners by birth and chose to resign their commissions and throw their lots in with the Confederacy. Of the roughly 820 West Point graduates on active duty at the outbreak of the war, 184 enlisted in Confederate service. Former officers then living as civilians also returned to military service at the outbreak of the war, with 99 of them heading to Richmond.

To fill out the command structure, both sides relied on appointments, often made by state governments to complete their burgeoning regiments of volunteers. Often termed political officers, since they were typically installed by the governor, these men came from a wide variety of backgrounds and, accordingly, were widely divergent in their abilities and successes.

All new soldiers, officers and enlisted men alike, had to learn the basics of military training. Former businessmen, politicians, doctors and lawyers spent their evenings pouring over field manuals and treatises on tactics and other martial matters. Their days were spent on the parade grounds, learning to drill along with their men. For recruits of all ranks and stripes, camp life could be dull; the reality of learning to march and form lines of battle did not match the romanticized imaginings of war they had harbored. Veteran officers insisted these skills, though tedious, could be the difference between life and death on the battlefield, but the green troops found this difficult to believe.

The grim realities of war came home to roost following the First Battle of Manassas. Having now “seen the elephant,” the new soldiers understood that by making the tasks of marching, deploying and firing second nature, they were able to function as a unit. The heat of combat also exposed several other major obstacles for the new fighting forces to overcome.

At this early stage of the war, uniforms for the two sides had not been standardized. Raised by their individual states, many regiments wore uniforms reminiscent of their state militias, creating a veritable rainbow on the battlefield as various units — on both sides — sported elements of navy, royal and sky blue; gray; green; red and gold. In several instances, the friendly fire incidents that resulted from the ensuing confusion had decisive results. In response, the Confederacy put formal dress regulations into effect in September 1861, stating that trousers, jackets, caps and greatcoats should all be gray.

The map of the battle.

I know very little about the Civil War. The North the South, Lincoln, the Union Army, the Confederate Army…, but then I am only a French Canadian born in the late 1940s.

What I know though is that Alexandre Benoit was a private with the 2nd Vermont Infantry and that he was present at First Bull Run. That’s sufficent enough to get any relative interested in First Bull Run and to start looking at that first battle. I am not related to Alexander Bennett, but then, maybe I am, because I have not found his parents.

This text about First Bull Run is taken from this Website. I will add pictures and hyperlinks as I go alongside Private Benoit.

Cheers rang out in the streets of Washington on July 16, 1861 as Gen. Irvin McDowell’s army, 35,000 strong, marched out to begin the long-awaited campaign to capture Richmond and end the war. 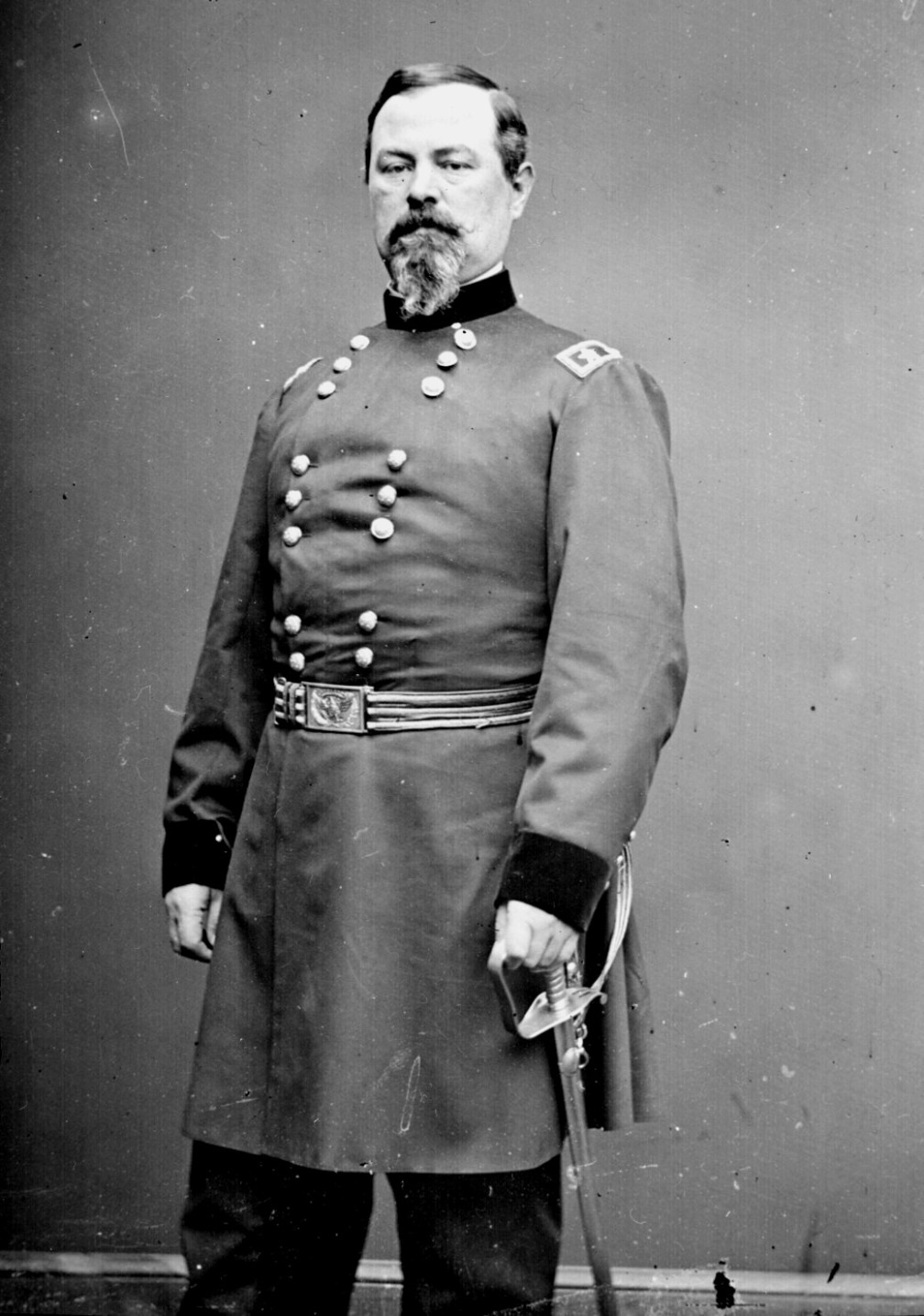 It was an army of green recruits, few of whom had the faintest idea of the magnitude of the task facing them. But their swaggering gait showed that none doubted the outcome. As excitement spread, many citizens and congressman with wine and picnic baskets followed the army into the field to watch what all expected would be a colorful show.

These troops were 90-day volunteers summoned by President Abraham Lincoln after the startling news of Fort Sumter burst over the nation in April 1861. 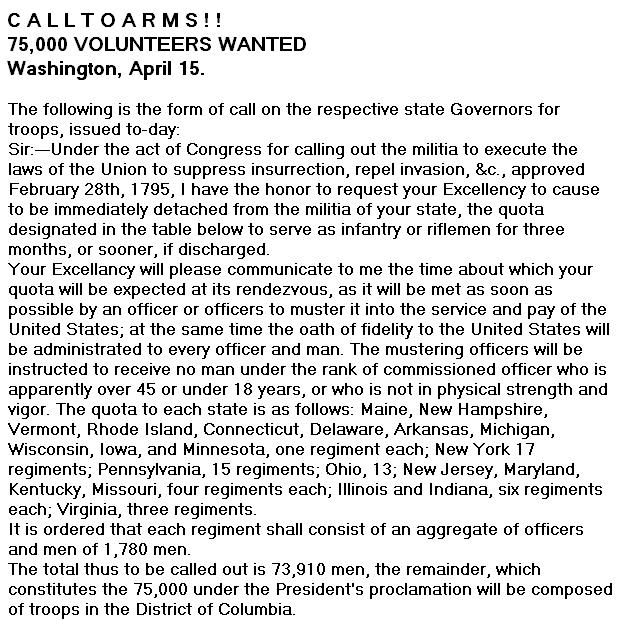 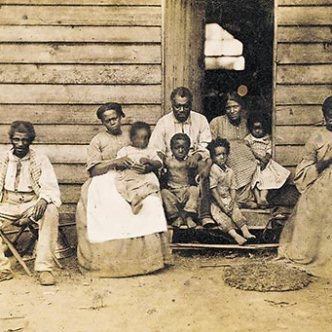 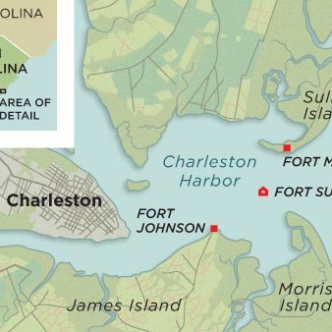 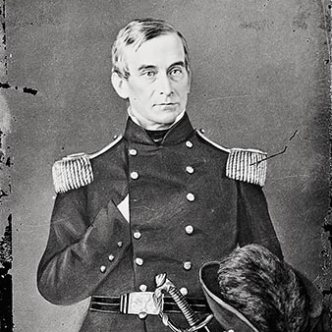 Called from shops and farms, they had little knowledge of what war would mean. The first day’s march covered only five miles, as many straggled to pick blackberries or fill canteens.

McDowell’s lumbering columns were headed for the vital railroad junction at Manassas. Here the Orange and Alexandria Railroad met the Manassas Gap Railroad, which led west to the Shenandoah Valley. If McDowell could seize this junction, he would stand astride the best overland approach to the Confederate capital.

On July 18 McDowell’s army reached Centreville. Five miles ahead a small meandering stream named Bull Run crossed the route of the Union advance, and there guarding the fords from Union Mills to the Stone Bridge waited 22,000 Southern troops under the command of Gen. Pierre G.T. Beauregard.

McDowell first attempted to move toward the Confederate right flank, but his troops were checked at Blackburn’s Ford. He then spent the next two days scouting the Southern left flank. In the meantime, Beauregard asked the Confederate government at Richmond for help. Gen. Joseph E. Johnston, stationed in the Shenandoah Valley with 10,000 Confederate troops, was ordered to support Beauregard if possible. Johnston gave an opposing Union army the slip and, employing the Manassas Gap Railroad, started his brigades toward Manassas Junction. Most of Johnston’s troops arrived at the junction on July 20 and 21, some marching directly into battle.

On the morning of July 21, McDowell sent his attack columns in a long march north towards Sudley Springs Ford. This route took the Federals around the Confederate left. To distract the Southerners, McDowell ordered a diversionary attack where the Warrenton Turnpike crossed Bull Run at the Stone Bridge. At 5:30a.m. the deep-throated roar of a 30-pounder Parrott rifle shattered the morning calm, and signaled the start of the battle.

McDowell’s new plan depended on speed and surprise, both difficult with inexperienced troops. Valuable time was lost as the men stumbled through the darkness along narrow roads. Confederate Col. Nathan Evans, commanding at the Stone Bridge, soon realized that the attack on his front was only a diversion. Leaving a small force to hold the bridge, Evans rushed the remainder of his command to Matthews Hill in time to check McDowell’s lead unit. But Evans’ force was too small to hold back the Federals for long. Soon brigades under Barnard Bee and Francis Bartow marched to Evans’ assistance. But even with these reinforcements, the thin gray line collapsed and Southerners fled in disorder toward Henry Hill. Attempting to rally his men, Bee used Gen. Thomas J. Jackson’s newly arrived brigade as an anchor.

Pointing to Jackson, Bee shouted, “There stands Jackson like a stone wall! Rally behind the Virginians!” Generals Johnston and Beauregard then arrived on Henry Hill, where they assisted in rallying shattered brigades and redeploying fresh units that were marching to the point of danger.

About noon, the Federals stopped their advance to reorganize for a new attack. The lull lasted for about an hour, giving the Confederates enough time to reform their lines. Then the fighting resumed, each side trying to force the other off Henry Hill. The battle continued until just after 4p.m., when fresh Southern units crashed into the Union right flank on Chinn Ridge, causing McDowell’s tired and discouraged soldiers to withdraw.

At first the withdrawal was orderly. Screened by the regulars, the three-month volunteers retired across Bull Run, where they found the road to Washington jammed with the carriages of congressmen and others who had driven out to Centreville to watch the fight. Panic now seized many of the soldiers and the retreat became a rout. The Confederates, though bolstered by the arrival of President Jefferson Davis on the field just as the battle was ending, were too disorganized to follow up on their success. Daybreak on July 22 found the defeated Union army back behind the bristling defenses of Washington.

That was Alexander Bennett first taste of battle. His commander was captured.

I told you all about him last time.