Am I digging to deep when looking for ancestors?

When you find one of your ancestors, or someone’s ancestor, you want to find more about him.

Was Chrétien Lemaire a Hessian?

Was Chrétien Lemaire a heartless warrior?

Every school child in America has heard the term “Hessian” in the context of Washington having crossed the Delaware to attack them on Christmas night in 1776. Few people know anything about them, or, if they do, they have a rather “cartoonish” image. In some circles the term has become synonymous with “soldier of fortune,” perhaps because, even in the 18th Century, they were referred to as “mercenaries”.

We must begin by noting that our current concept of a unified, German nation (in no way to be confused with the more recent fall of the Berlin Wall), is a product of the 1870’s. The Germany of the 18th Century was what was left of the old “Holy Roman Empire” of the Middle Ages. It was a somewhat bewildering collection of separate, and autonomous, city-states, duchies, and principalities as large and important as Prussia, and as small and nearly forgotten as Anhalt-Zerbst.

When trying to understand their role in the American Revolution, it is important to recognize that one of these principalities was Hanover, which was governed by it’s “Elector”. That “Elector” happened to be George III of Great Britain (hence the current ruling family of Britain is still, technically known as the “House of Hanover”). Great Britain traditionally relied on its impressive, defensive “moat” — the English Channel, and always maintained a relatively small army in peacetime. These German city-states, being a part of Continental Europe with few natural boundaries, of necessity, had to maintain comparatively large, standing armies for their own safety. Many regarded Great Britain as a natural ally and fought alongside her as such during the Seven Years’ War and earlier conflicts.

Being a Constitutional Monarchy, Britain was one of the more liberal governments on Earth. The economy was generally in good shape, so labor was almost always at a premium. Consequently, Britain always found it difficult to raise many new regiments for its army during times of war. Those new men it did recruit (or impress), needed to be trained. The new regiments needed to be exercised with others to become militarily viable. The German princes would often see Britain’s military needs as opportunities to, at the same time:

The soldiers were themselves only mercenaries in the sense that they were paid for their service to their own ruler, just as any member of the U.S. Military is today. A “soldier of fortune” would be someone who acted, on his own, in a sense as a “free agent”, contracting his services to whoever would pay him. In all, George III was able to contract with six of his fellow German princes for the use of some of their troops:

All of these regiments were under the command of Col. Johann Gottlieb Rall. As grenadiers and fusiliers, they considered themselves elite units and thus, all the enlisted men wore a form of the well known, tall brass miter cap.

These units had already served with valor at the Battle of Long Island, the Battle of White Plains, and the taking of Ft. Washington in the several months prior to their occupation of Trenton.

Chrétien Lemaire was with the Hesse Hanau Chasseur Corps. That I am sure of.

Did Chrétien Lemaire fight in the U.S. against the Patriots?

Chrétien was with Creuzbourg’s Jäger Corps.

Creuzbourg’s Jäger Corps (Jäger-Corps von Creuzbourg) was an independent Jäger battalion raised by the county of Hesse-Hanau and put to the disposition of the British Crown, as part of the German Allied contingent during the American Revolutionary War. The corps fought at the Battle of Oriskany, although mostly serving as garrison of different Canadian posts. (Wikipedia)

Maybe he fought in one battle.

The Battle of Oriskany, fought on August 6, 1777, was one of the bloodiest battles in the North American theater of the American Revolutionary War and a significant engagement of the Saratoga campaign. Early in the siege of Fort Stanwix, an American relief force from the Mohawk Valley under General Nicholas Herkimer, numbering around 800 men of the Tryon County militia and a party of Oneida Indians, approached in an attempt to raise the siege. British commander Barry St. Leger authorized an intercept force consisting of a Hanau Jäger (light infantry) detachment, Sir John Johnson‘s King’s Royal Regiment of New York, Indian allies from the Six Nations and other tribes to the north and west, and Indian Department Rangers totaling at least 450 men.

The Loyalist and Indian force ambushed Herkimer’s force in a small valley about six miles (10 km) east of Fort Stanwix, near the present-day village of Oriskany, New York. During the battle, Herkimer was mortally wounded. The battle cost the Patriots approximately 450 casualties, while the Loyalists and Indians lost approximately 150 dead and wounded. The result of the battle remains ambiguous to this day because the advantage of the Loyalist victory was countered when a party sortied from Fort Stanwix and sacked their camp, spoiling morale among the Indians.

This was one the few battles in the war where almost all of the participants were North American: Loyalists and Indians fought against Patriots in the absence of British soldiers. For the Iroquois nations, the battle marked the beginning of a civil war, as Oneidas under Colonel Louis and Han Yerry allied with the American cause and fought against members of other Iroquois nations. (Wikipedia)

For what I was able to find out, most of the Hesse Hanau soldiers stayed in Canada from 1777 to 1783.

I guess we will never be certain Chrétien Lemaire fought at the Battle of Oriskany.

For more information on Germans in the American Revolution, you can click here. 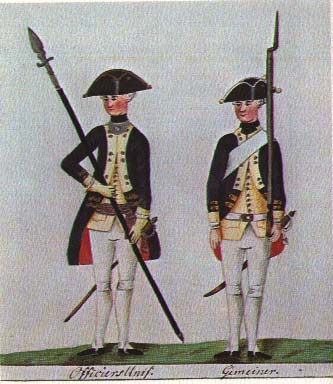 – Chrétien what will you do after your discharge?
– I am going to stay here, get married to a lovely fraulein, and raise a family.