I had found another distant cousin last year…

Fran, who is related to me by her ancestor Caroline Ménard and John B. Alexandre,  gave me a lot of information about that family… and I mean a lot. John B. married twice and fathered 18 children.

Enjoying all your entries to your blog. I may have info on Philomene Lagasse and JB Alexandre’s daughter, Helene. For some reason, which I can not explain, I had her down as Abeline (baptized on 24 June 1867, Notre Dame de Stanbridge). Today I received an invitation to a birthday party for one of my Mother’s Bleau cousin, who is the granddaughter of Joseph Henry Bleau and Helen Alexander. Her brother had told me ages ago that their uncle had married an Alexander. I did their line back around 2001 so I never made a connection until today when I checked my Family Tree and saw the names of their grandparents. He never gave me any other info on the Bleau line as he knew I was doing my maternal grandparents’ lines.

I will be seeing them August 4 and will discover if I am right. Remember the photo of JB Alexandre and Philomene Lagasse with two daughters and two children? If I am right, one of the children is their Dad, born 1891 in North Adams, MA. If so, we are related through my maternal grandfather and through my maternal grandmother’s side. I am hoping they might have some photos of the Bleau line. They have two great albums of their Mother’s family. I will get back to you when I get direct info from the Bristol Bleaus.

P. S. Have you a definite identity the young ladies in the great photo of Philomene in the center and her daughters around her?

I was speechless in my living room as I was waiting for my morning coffee to brew.

Fran and I are not that distant cousins any more…

I quickly wrote back…

Next article using what you just sent me. Simply speechless. I know Joe will love this post. Can’t wait to write it. Of course you will have the answer to the question about Philomene and her daughters… Sort of a recap of where we are in this dossier.

Thanks for your message.

I hope I won’t loose sleep over all this.

Just can’t wait for your next message.

You really know how to entice people…

Must be in your genes.

Her nickname was Libbie.

Joe also had sent me her obituary…

Mrs. Libbie Alexander widow of the late John Alexander died at the home of her son David Alexander 149 Park St. last evening as a result of complications due to old age.

She had been an invalid for several years. Mrs. Alexander was born in Quebec, Canada 79 years ago. She spent her early years there. She was married in 1869 to John Alexander. They moved to the state and lived for some time in North Adams, Mass. They came to Bristol twenty six years ago and made their home here. Mr. Alexander died in 1914.

Mrs. Alexander is survived by four daughters: Mrs. David Bleau, Mrs. William Archambeault and Miss Mary Alexander of Bristol and Mrs. Phoebe Lustrich of Brooklyn, NY. By three sons: John, David, and Peter Alexander all of Bristol, and by many grand children and great grand children. She was one of the well known French residents and was a member of St. Ann’s Church. The funeral will be held at St. Ann’s Church at 9 o’clock Monday morning. Rev. Joseph P. Perreault will conduct the services.

Libbie’s name was entered as Philomel!

That was not much to go on…

But Joe found this blog and he sent me her picture and what appeared to be Libbie’s daughters all aroung their mother. 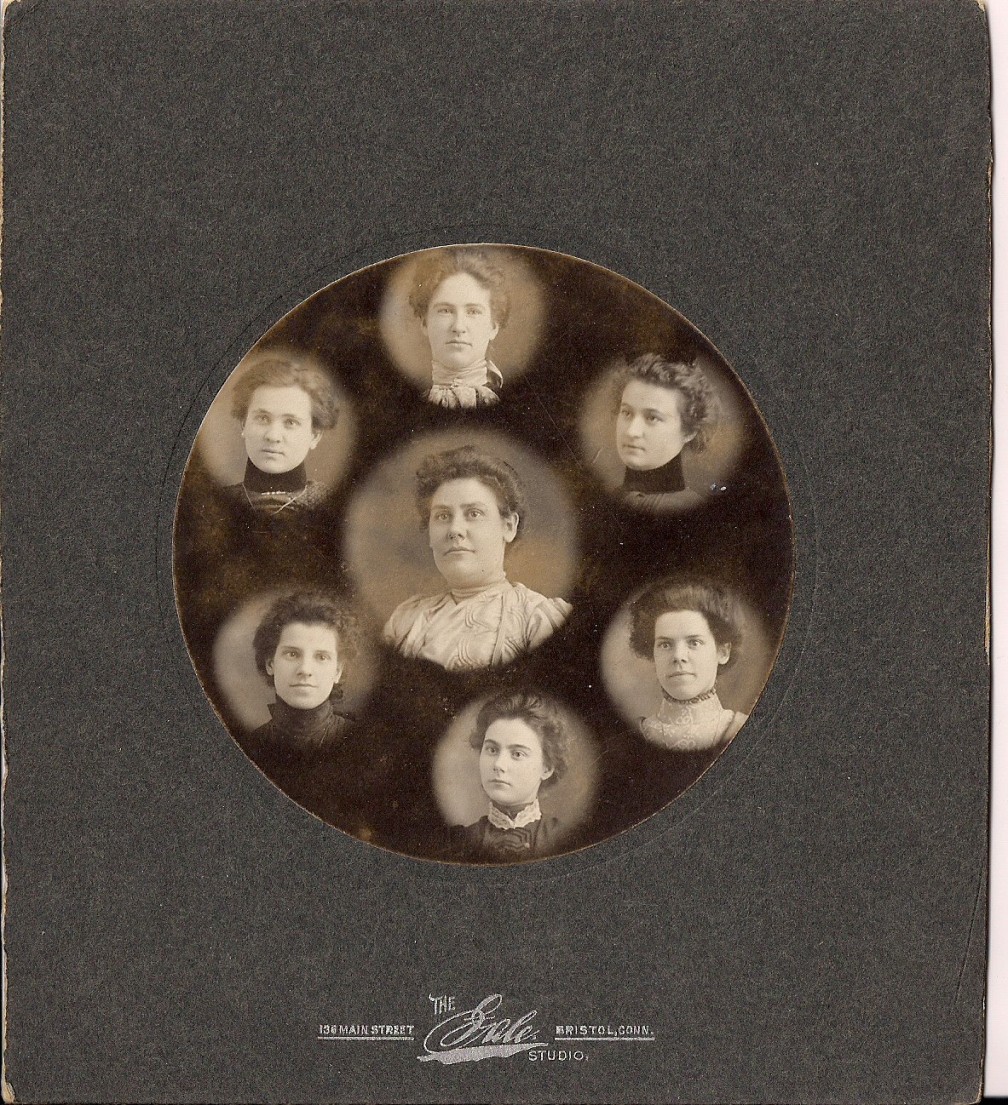 Where Helen fits in all of this?